Continuous Improvement, like history, is just one thing after another, and whilst we've made great strides along our process maturity road-map, there's still inevitably always room for more improvement.

It takes ages to create a new feature branch.

Our repository is huge, it has a disk foot print of approximately 9GB. Each branch is therefore also 9GB. It doesn't take TFS particularly long to create the new branch, the delay is what happens next:


The process of creating new features is entirely scripted in Powershell, so the procedural aspect has been automated; The developers are however still inconvenienced by the lengthy 'wait' for completion.

It takes ages to build our new feature (building dependencies)

Once the "Get All" is complete, there is another wait of about 20 minutes for the entire product to be built locally so that all the referenced assemblies are available within the workspace.

The architecture of the product demands that its built in this way. We can't decouple as this is by design, it's meant to work this way. Its a fine design conceptually, operationally and architecturally. It is however, a nightmarish web of inter-dependency to build.


It takes ages to publish to a test environment

Once our new feature is branched and built it needs to be published so that its web services can be consumed and the messaging system can function. This takes a further 20 minutes as its not a trivial task to deploy over 100 websites and databases.

Let's have a go at making things better?

As a first pass at improving this situation we attempted to split the team along the traditional divide of skill-set, a separation of the platform and UI.

The two distinct skill-sets with a clear division of labor presented us with an opportunity to try and split the product.

The UI team's solutions are typically consumers of the platform, so in the build pipeline they are the last to be built and packaged. Meaning that the UI devs have to wait for the platform to be built first.  Using NuGet we were able to directly embed these assemblies into the UI solutions.

The platform builds published the platforms API to our own hosted Nuget repository which was then immediately available to the UI team for consumption.

The results were pretty pleasing:
The division along these lines was working reasonably well for the UI team. But platform developers and so-called "full-stack" developers were not feeling the love.

The biggest issue with the division we'd created was the associated changes in working practices.

Each feature now required two branches, one for each team. The NuGet packages provided the link between Platform and UI branches.

This kind of worked but for..
But we had learnt much from our first attempt...
During the discussion an idea was born of the nascent techniques developed during our first attempt. Instead of separating the teams as we had done, let's try and separate the feature instead. Let's only take what we need from the repository and use NuGet to plug the remaining dependency gaps in the workspace.

Partial builds and Isolating the feature

We've used NuGet to facilitate a situation where the developers can be select which domains they intend to change, and use NuGet to reference the domains they leave behind. When I say leave behind, I mean simply absent from the local workspace.

By actively managing the local workspace mappings we can hide-away the domains we're not changing.  The end result of this is that developers of any specialisation, or generalisation, can work on a feature in a workspace tailored to their exact needs.

Here's an extract from our internal training documentation for new developers.  This visual aid hopefully illustrates the difference between a partial build using selective workspace mapping,  and a full-output build. 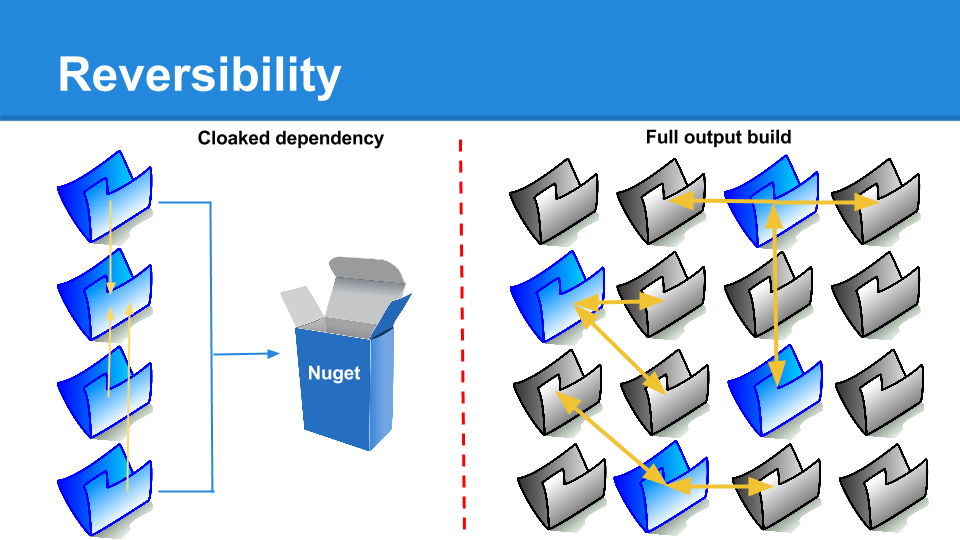 The benefits of partial builds

When we look at the list of benefits, it's embarrassing that we didn't think of this sooner.

In order to make this work the developers have been provided with a set of Powershell based scripts that perform all the heavy lifting. Crucially the scripts follow a Q&A approach to ascertaining the developers requirements before acting.

Defining a new feature, entails created an isolated feature branch on the developers local workspace, with only the solutions of interest present.
At the end of this process, which takes about 30s to complete, the developers have a new branch within their workspace which contains only the domains requested. All the other domains swapped for NuGet references from the 'green build' selected.

You would like to create a new feature as described?:
Create a new branch called 'FeatureX'
Reference all excluded domains with packages from build 23070
The TFS path '$/Platform/Sprints/FeatureX' is mapped locally as 'E:\Projects\Platform\Sprints\FeatureX'

You have chosen to add the following into your local workspace:

Reference all excluded domains with packages from build 23070

Performed more frequently than any other action, builds will be performed on the solutions isolated in the feature branch. Dependency discovery is still important, as there is still a build order to be observed for those solutions which are present.

Occasionally, another developer may wish to collaborate on a feature already under development. In this instance the new developers need to recreate the same workspace configuration within their own environment. The TFS build definition has its own set of source mappings that recreate the same level of isolation on the CI server, so this can be queried to extrapolate the solutions of interest.

Reverse integration is very straight forward. The heavily cloaked feature branch only contains a small isolated group of solutions, so it takes TFS far less time to identify changes during the merge process.

Once the feature branch has been successfully merged back into Main, the isolated solutions are reunited with the rest of the platform. And without any missing dependencies,

During the creation of a new branch, the Q&A will work out whether you're taking the 'Head' of the repository, or going back in time to a previous build.

If you select an older build label, you are presumed to be performing a hot-fix on the current production version. The Q&A script will present a selection of 'QA approved' builds from TFS which will serve as the base of the hot-fix branch.

The NuGet packages used to substitute absent domains are fixed to the same version of platform as the hot-fix branch source. This ensures that complete compatibility of the domains affected by the hot-fix with the current production version.

We typically release weekly, and so hot-fix branches are used frequently by the UI developers for getting quick updates out to production ahead of the next release.

Full platform (Before)
This is how the world looked before we undertook the isolated feature work.

Partial build (isolated feature)
This is a bit finger-in-the-air, as the code affected by a feature varies greatly depending on the scale o the feature.

Headline benefits
The things that really matter to the people I support:

*Typically, up to 3 solutions are affected by a feature.